After a great nights sleep on the new Exped synmat (thanks JB for suggesting and Mama and Pops for an early birthday present – I cannot recommend it highly enough!) I had another slow start. I see a pattern forming!

Another puncture from the same blackthorn I had not been able to find yesterday and a snake bite puncture (because I am an idiot) and I am packed again and on the road.

How could I not find this culprit?! I blame cold hands.

I cycled from Honeystreet across Salisbury plains via some pretty back roads to Woodhenge (near Stone henge). It seemed that everyone was enjoying the fantastic weather and in this area of the world that means taking your vintage car for a spin.

Woodhenge was made up of 6 ovals of posts which point in the direction of the sunrise on summer solstice and the midwinter sunset. It is evidently much less commercial and therefore a more peaceful place than Stonehenge but with the posts up would have been very imposing especially considering one ring of posts is thought to have been 9foot high with only a couple of foot between each one. From Woodhenge I followed some of the back roads and was rewarded by the sight of a barn owl on a post checking out his hunting grounds. Cycling is so amazing for seeing nature in ways we usually miss.

It had been a short day as I peddle into Stonebridge and find a camping spot in town before heading to a pub for an inflated coffee and wifi!

This is the reality of the early morning ‘tat down’ before I get spotted.

Vital stats of interest (to me!)

Vintage cars – 6 – only one driver happy to wave.

From Stonebridge to Petersfield

Followed the main road to Winchester which though busy was ok. Stopped in at Hargroves Cycles to check my gears. No problem, just me being twitchy as it will be harder once abroad, when my communication is more limited. Next stop Petersfield. Spent far too long there sorting out admin which whilst annoying was totally necessary. Big thanks to Holly in the bank! There are always good people around.

From Petersfield I rearranged the Channel Tunnel booking for Thursday. Much more achievable.

Travelling on from Petersfield I continued the cycle across the South Downs through Midhurst which has more antique shops per square mile than I thought possible – all of them of the high end of the market. This is in marked contrast to the bric a brac shops on the outskirts of the Downs.

I stayed in pretty Wisborough Green and got an early start for Rye. This was by far my longest day and I think the most beautiful so far. The South Downs had been hilly at times but over the latter part of the day I started to meet 11% hills which are fun going down (unless in the dark with no lights!) but more of a challenge going up! I had Nic’s voice ringing in my ears saying “you need to lose some weight” and he didn’t mean me! As I travelled through Sussex I could see the influences of the Dutch and Flemish on the architecture. I had to stop early in Shipley and check out my first windmill of the trip. Hilaire Beloc lived in Shipley. If you don’t know his ‘Cautionary Tales for Children’ have a look!

I had been so lucky with the spring weather right from the start of the trip and this day was no exception.

I passed the Sugar Loaf on the way to Rye – http://johnmadjackfuller.homestead.com/sugarloaf.html

Apparently built as a folly to win a bet and then actually used as a dwelling. It was a lovely evening to go and have a quick look.

My next brief stop was in the town of Battle … hmmm I thought … something interesting might have happened there! When I arrive the English Heritage gate dude was about to shut up for the night but kindly let me in briefly to tell me about the massive battle, the abbey and the new house. About 20 minutes into the conversation I realise that what he is refering to is THE battle of Hastings – 1066 and all that. Again I blame being cold and tired! He advised that they cannot dig plants into the gardens without permission as they keep digging up battle remains!

The guide said they think a nearby humble roundabout is the place Harold took the arrow to his eye and the country fell to the Normans.

The gate house held ammunition during WWII when a stray bomb bounced off two of the walls smashing its way through the back pillar before ending up in the grounds behind. There was apparently enough explosive to have flattened the town totally had the bomb gone off in the gate house.

From Battle I had an amazing cycle through Fairlight and across the marsh lands surrounding Winchelsea Beach into Rye. It was a warm night and there were lots of wetlands birds calling, a sliver of cresent moon in the sky and a really peaceful ride. As it was late I didnt see much of Rye but went up to the Citidelle and was amazed by the medieval look of the town. It appears almost unchanged. That part of the ride was an amazing experience and I will be visiting Fairlight, Rye and the Marshes on my return. 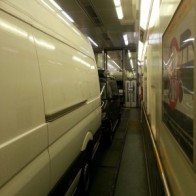 On the Tunnel Bike Express! 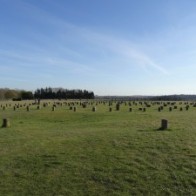 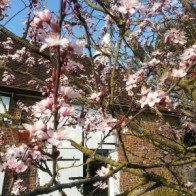 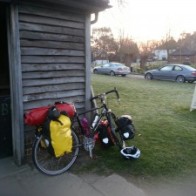 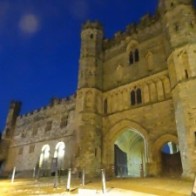 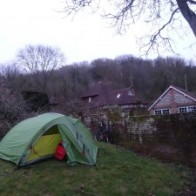 Posted from WordPress for Android and with love from Rae!